I received a call from our neighbour asking me to bring buckets down as there was an Ocean Spirits team member dealing with a rare day-nesting Leatherback Turtle down the beach on her own. I raced down and was able to help keep her cool whilst she laid her eggs in the hot sun, it was an absolutely amazing experience! Another team member, Matt, arrived just as she finished and he and Varna tagged and measured her as she covered the eggs, I was surprised how firmly and precisely she packed in the sand. The turtle then proceeded to fill in the nest and returned to the sea, exhausted and hot, while we covered the nest and camouflaged it to protect it from poachers.

Poachers are a serious problem despite these magnificent creatures being protected as endangered species. You can read more about the dangers of eating turtle meat and turtle eggs in this article. Known as a part of tradition, unfortunately the world has changed and the health hazards to humans eating turtle meat and eggs are a result of the chemicals absorbed by the sea turtles as they travel long distances and cross through polluted seas. Lowered fertility, toxic poisoning, and even death are well-documented.

Tourism supports the protection of Sea Turtles, as the value of a single visitor visiting the island to see these incredible creatures provides thousands of dollars more income, far more than that of the meat or eggs on their own! Grenada is one of the most popular spots in the Caribbean for Leatherbacks and other sea turtles to come lay their eggs, but this was the first adult turtle, as I have only helped with hatchlings before. I was thrilled, what an incredible privilege!

Under the guidance of Ocean Spirits I took loads of photos and video, and got them to take some of me beside her , too. Of course, my battery died before I was finished but Varna has kindly sent me some from her phone camera which I will include at the end of the video – I will post it here when it is edited together.

Bathway is not an ‘official’ turtle beach, but guests can see turtles there at night. BRING A RED FILTER if you are planning on sitting out with a flashlight, an unprotected light is illegal on the beach as it interferes with the nesting turtles. Official tours can be booked in advance at the Bathway Nature Centre for neghbouring Levera Beach from April 1st, and run until the end of July. Hatchlings are still emerging into September, also emerging in the night as protection from predators.

Learn more about the work of Ocean Spirits here, or support their program through our Pack for a Purpose project! 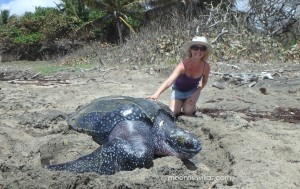 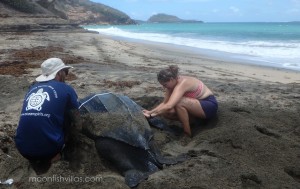 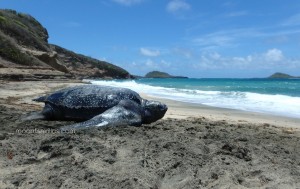